Legislation that will significantly expand the remedies available to requesters of public records will take effect on September 28, 2016. The effect on local governments responding to public records requests is not yet clear. S.B. 321 was passed unanimously on May 25, 2016.

An individual may file a complaint with the Court of Claims by filing the complaint on a form that will be available online starting on September 28th and paying a fee of $25. The complaint must be filed either in the Court of Claims or in the court of common pleas of the county where the public office from which records have been requested is located.

In most cases, the dispute will be referred to mediation. However, if the parties are unable to mediate the dispute to a resolution, a special master, currently former Assistant Attorney General Jeff Clark, will consider the dispute. Public offices must respond to the complaint within 10 business days from the date mediation is terminated. Each party may attach affidavits in support of its complaint or response, but may not conduct discovery. The special master will issue a report and a recommendation based on the relevant law at the time of filing.

A prevailing complainant is entitled to receive copies of the public record, as well as recover the $25 filing fee and other costs associated with the action. Typically, the complainant may not recover attorney’s fees.

(Please see the chart below for a more detailed explanation of the Court of Claims process.)

Prior to the introduction of the new Court of Claims process, the Ohio Auditor and the Ohio Attorney General established services to address public records disputes. Neither dispute resolution service provided a legally binding decision to the parties, but both served as affordable alternatives to a mandamus action. The Ohio Attorney General and the Auditor have discontinued such services given the new Court of Claims process.

Individuals are still afforded the option to dispute a public records denial or delay by filing a writ of mandamus to compel the public office to release the records. Such action is often expensive and time-intensive, but also allows the parties to engage in discovery.

Further, a court may compel the relator to pay the public office’s court costs, expenses, and reasonable attorney’s fees if the relator files a frivolous mandamus action.

If you have any questions about this change in the law, please contact a member of Walter | Haverfield’s Public Law group. 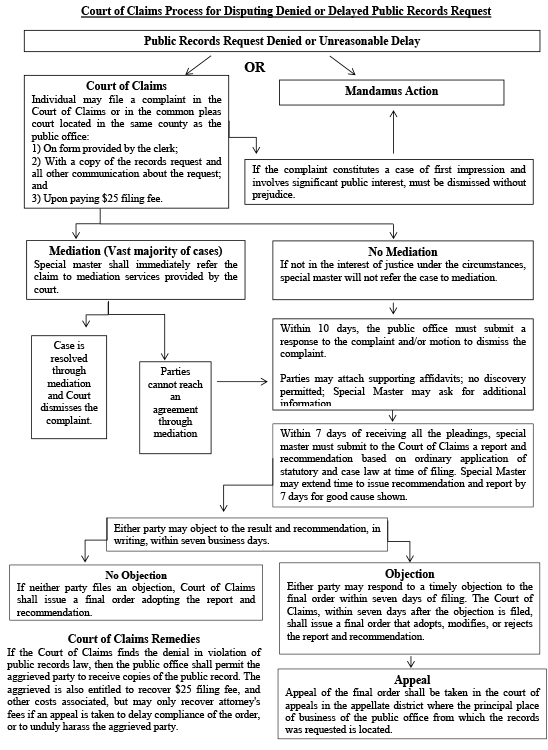 Print / Save to PDF
Department of Labor Announces Penalty Increases Ohio Court Weighs in on Transgender Student Access to Restrooms and Name Is...
Scroll to top