by Darrell A. Clay

On August 13, 1932, Western Reserve School of Law graduate Paul W. Walter, the son of German immigrants, joined several hundred recently graduated attorneys in Cleveland’s Engineers Building where they were to be sworn into the Ohio Bar. It was before the start of this momentous ceremony that Walter stood up in the crowd and called out, “Is there a Haverfield in the house?”
In the months prior, a mutual friend of Walter and fellow attorney D. Rusk Haverfield, a Harvard Law School graduate, had strongly suggested the two become law partners. But they hadn’t yet met before that pleasant summer day during the Great Depression.

Within minutes of this very public introduction, Walter announced to Haverfield, “We’re going to practice law together.”  Haverfield’s response was pragmatic: he declared he was married and needed a job. In return, Walter reminded him, “It’s the Depression. There are no jobs.” And thus was born Walter and Haverfield, with Harvard’s Haverfield as “Mr. Inside” and Western Reserve’s Walter as “Mr. Outside.”

The story of the firm’s genesis reflects Walter’s extraordinary ability to mobilize others to take meaningful action. It became the hallmark of his leadership style, and a quality his future colleagues admired. “When Paul got involved in a project, everyone got involved full bore,” said Charles Riehl, Of Counsel in Walter | Haverfield’s Litigation and Public Law groups.

The firm’s founding also marked the moment from which Walter would dedicate the next six decades of his life and career to advancing policy locally and at the highest levels of national government.

Just two years into his career, Walter played a pivotal role in convincing Harold Burton to seek election as mayor of Cleveland in 1934. Burton would serve three terms as mayor before being elected to the U.S. Senate, and later appointed to the U.S. Supreme Court. Walter’s relationship with the statesman led to his appointment as volunteer chairman of the Work Projects Administration, which provided 280,000 jobs to economically-devastated Clevelanders and facilitated construction of and improvements to various Cleveland landmarks. That included Hopkins Airport, Burke Airport, Cleveland’s lakefront, the Flats, and a number of public parks and buildings.

In the years that followed, Walter’s commitment to ensuring city management of public resources led the firm more deeply into municipal law. In an effort to reignite interest in Cleveland’s deteriorating public electric plant and prevent the formation of a monopoly by a privately-owned company, Walter formed the Cleveland Municipal Light Plant Association in 1937. He successfully saved the plant and went on to join then Cleveland Transit Commissioner Ed Schweid in orchestrating a takeover of the privately-owned transit system by the city of Cleveland.

In 1938, Walter was once again tapped to manage a high-profile campaign, this time for Ohio Republican Robert A. Taft, who sought a seat in the U.S. Senate. Walter led two successful re-election campaigns for the senator known as “Mr. Republican,” while also serving as floor manager for Taft’s unsuccessful attempts to secure the Republican presidential nomination in 1940, 1948, and 1952. Growing the firm’s expertise to include labor law, Walter joined Taft in forming the National Academy of Arbitrators. He also notably served as a key author of the Taft-Hartley Act of 1947, which governs the activities of labor unions.

As Walter’s outside interests drove the expansion of the firm’s practice areas, so grew his influence in the nation’s corridors of power. Walter was instrumental in persuading Taft to endorse the successful presidential campaign of Dwight D. Eisenhower in 1952, and by the 1960’s, he had been appointed national president of the United World Federation. In this capacity, Walter worked with Presidents John F. Kennedy and Lyndon B. Johnson to promote global peace by successfully lobbying Senate Republicans to support passage of the Limited Test Ban Treaty. 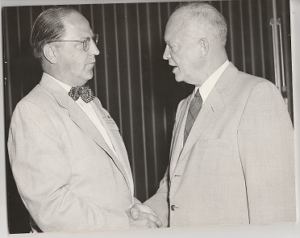 Despite his extensive involvement in national politics, Walter remained dedicated to serving the people of Cleveland. He served for 25 years on the board of the YMCA, chaired the Western Reserve Historical Society board, and was a trustee for the Cleveland Metroparks Zoo. For more than 50 years, he was the head of Hiram House, Cleveland’s first settlement house. His legal work defending the business interests of the Hough Area Development Corporation in the early 1970’s following the Hough Riots in 1966 exemplified this commitment.

Paul Walter and D. Rusk Haverfield both passed away in 1992, leaving behind them the firm that still bears their names.

“Paul taught us to fight for our clients,” said Michael McMenamin, former managing partner of Walter | Haverfield. “He always had our backs and made us believe in ourselves. If Paul, with all he had done, believed in us, how could we not do the same? He truly was a great man.”

Now in its 86th year, Walter Haverfield stands in testament to an enduring legacy of service to city and country first modeled by one of its founding name partners, Paul Walter.

For more on Paul Walter, click here to watch an interview that he did in 1990.