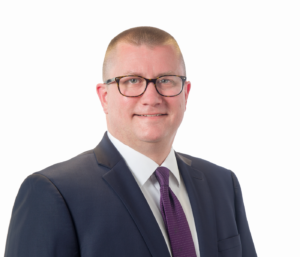 The United States Army Reserve has selected Jason K. Wright for promotion to Lieutenant Colonel. Jason is an associate in the Business Services Group, and formerly held the rank of Major. In his new role as a Lieutenant Colonel, Jason will become a senior leader in his Army unit, responsible for training and mentoring junior attorneys and Army Reserve officers.

Prior to joining Walter | Haverfield, Jason was mobilized three times in support of Operation Enduring Freedom and Operation Iraqi Freedom, and practiced law with the U.S. Army in Fort Hood, TX, Afghanistan and Iraq. Some of his responsibilities in those locations included overseeing internal investigations of alleged misconduct, conducting legal reviews of completed investigations, drafting ethics opinions, providing legal advice on fiscal law and government acquisitions, and overall serving as a legal advisor to the Command.

In being selected for the promotion, Jason has gained the respect from his peers needed to rise up the ranks.

“We sincerely thank Jason for his service and congratulate him on his promotion with the U.S. Army Reserve,” said Ralph Cascarilla, Walter | Haverfield Managing Partner. “Jason is invaluable to our team, as he continually demonstrates a strong worth ethic and high moral standards.”