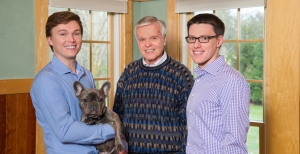 Admiration for their father and curiosity about his career fueled Josh and Alex Hurtuk’s interest in real estate law from a young age.

“Alex would draw up contracts around the house and hide parts of it so I couldn’t tell what I was signing,” recalls Ed Hurtuk, father of Josh, 33, and Alex, 27. “He wanted a horse so he drafted a contract that I signed that said he could get a horse by the time he was 12 years old.”

Contracts turned into negotiations in the Hurtuk household as the kids mimicked their father, Ed, a real estate lawyer who opened the law firm of Hurtuk & Daroff in Mayfield Heights in 1997.

“Alex’s interest in a horse faded so he used the contract as leverage and negotiated for something else – a painting of LeBron James in his bedroom,” added Ed as he laughed. “The contract was a long-term play,” said Alex.

The Hurtuk kids soaked in their dad’s work – as foreign as it seemed – while Ed shared small details of his job along the way.

“When I was growing up, I didn’t understand that clients could leave and go to another firm,” said Alex Hurtuk, a downtown Cleveland resident and former college tennis player. “I thought my dad’s clients were part of our extended family, and I think that speaks to my dad’s positive and long-term relationships with his clients.”

Josh grew up excelling in science, while Alex enjoyed math and art, and Ed did not expect their interest in real estate to exceed their passion for such subjects.

“I thought Josh and Alex might think it’s boring to sit and read a lease,” said Ed, who once served as law commissioner for the Ohio Supreme Court. “I thought there are sexier things out there than real estate law.”

But when the brothers wanted to work at Hurtuk & Daroff in high school and college to earn some extra money, he sensed he could be wrong.

“I knew through college that I wanted to go to law school and work in real estate,” said Josh, who has been selected to the Ohio Super Lawyers Rising Stars list for the past four years. “In law school, I geared all of my classes toward real estate and transactional law.”

“I enjoy the contractual side of real estate and the fact that there is a tangible product when a project is complete,” added Alex.

Once Josh and Alex started their educational paths toward real estate law, Ed hoped that the three of them could work together at Hurtuk & Daroff someday and carry on the family business. But, in a twist of events, the trio ended up working together in a much different scenario.

“It never occurred to me to merge with Walter | Haverfield,” said Ed, who taught real estate and finance as an adjunct faculty member at Case Western Reserve University School of Law and the Cleveland Marshall College of Law.

“It was a good way of getting Josh and Alex involved in my practice, and it’s been great for us to have the back-up of lawyers at Walter | Haverfield,” said Ed.

“For me, it was a dramatic change in thinking,” said Josh.

Since the acquisition in 2019, the firms have benefited from the strength, expertise and experience of each other, and Josh and Alex are appreciative of the opportunity to learn from their dad.

“People have always told me that my dad is a great attorney, but he is so humble about it,” said Alex. “He teaches me that if you’re humble, work hard, do a good job and are nice to people, it works out.”

“My dad says the best way to get work is to do good work,” says Josh. “My dad is dedicated to getting people to work together and be on the same page.”

All of the Hurtuks, including Bethany, Ed’s wife, and their third son Ben, who works for a private equity firm, are fierce Ohio State football fans. “We are a pretty quiet family,” according to Ed, “but people are shocked by the rowdiness when they watch an OSU game with us.”

The Hurtuks say work doesn’t spill over into family time, but Sundays can be a bit tricky.

“I work on Sundays, and they don’t,” Ed laughs.

Josh and Alex are quick to respond to say they work Sunday nights after dad goes to bed.

Print / Save to PDF
The SECURE Act: What You Need to Know

COVID-19 and the Workplace: The Employer Response Plan
Scroll to top